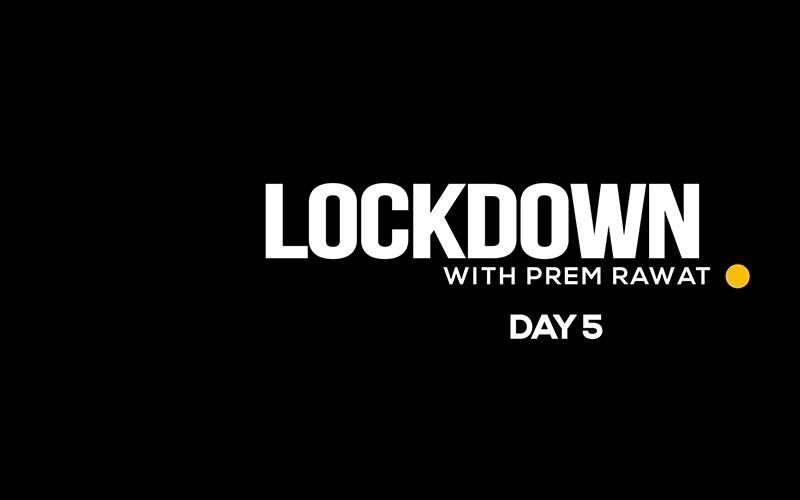 with Prem Rawat
"Be thankful, be positive, be real! Understand the reality. You’re a part of all that is around you. When you can shine, you keep darkness at bay. And that’s so important—every single day—to keep the darkness at bay." — Prem Rawat “Lockdown” Day 5: A personal message from Prem Rawat addressing these trying times.

View all released episodes of "Lockdown" under the Series tab.

Hello, everyone. I hope you’re doing well in this whole drama and trauma. This is Prem Rawat here.

And then I was reading this whole little bit about New Orleans, where they had this Mardi Gras and all the people came out. And now a lot people are getting sick.

There are a lot of people out there, young ones, who are like, “I don’t care if I get coronavirus; I just want to have a good time.” And the demographics of people who are getting sick in the United States is very, very different, believe me. There are a lot more younger people getting sick in the United States than other regions.

So, you sometimes wonder, “What exactly are we capable of?” It’s a simple thing; you have to isolate. If you isolate, don’t get contamination, sooner or later this thing will move along. You don’t have to get sick; you just have to have your social distance, keep your distance.

And all of a sudden, something happens and all, what you think is “normal” is no longer normal and you can’t do it—and in fact, if you do it, it’s detrimental to you.

So, it reminds me of this story: “Which one is real?” So, there was, once upon a time, there was a king—and he was quite well-off and he had a beautiful kingdom and things were good.

And one day he has this dream—and in this dream, he dreams that he was fighting with his neighbor. And they’re having a war—it’s a frantic war—and all of a sudden he loses the war, and he has to flee the battleground and he has to get away, as far away as he can, to save his life.

All of a sudden he sees a little hut. He goes over to that hut. And in there, in that hut is an old woman. He goes to her and he says, “Could you give me something to eat, please?” And she says, “Look, I don’t have any food to give you, that’s already prepared. But here is a little bit of rice and here are a little bit of lentils; you can cook them together, make a kitcheri and satisfy your hunger.”

So the king says “thank you,” takes the rice, takes the lentils, gets a little pot. He has to get the wood. It’s raining and so the wood is all wet, smoky and he tries to start a fire; it takes him a long time—but he finally gets the fire going.

And he’s really hungry; he’s really tired; he’s devastated; he’s lost his kingdom—I mean, everything is just, you know, piling up on him. And then he finally gets the rice done, the lentils done. But they’re too hot for him to eat, so he finds a leaf and he spreads the lentils and the rice on the leaf, just to cool it down.

And meanwhile, there are these two bulls and they’re fighting with each other. And they come towards where he’s cooling his food. And the next thing you know, they take what he has made with great difficulty and just mix it into the mud, just destroy it.

This is like, too much for him. So, finally, he just ends up crying, tears rolling down his eyes—and he wakes up. The wetness on his face, the tears on his face wakes him up.

And he wakes up. And he’s like, looks around—and all of a sudden he sees he is in his bedroom! And he’s got his beautiful velvet bed and beautiful ornate pillars and lamp and the bodyguards there and—and he’s bewildered! This dream was so real for him; he’s really bewildered.

And he finally gets up and he goes, “Oh my God. Which one is a dream? That, losing the war, being in the jungle, cooking that food, was that the dream? And this is real? Or is it the other way; this is all a dream, (that I am a king, that everything is fine), and that was real? Me losing the war, me being nobody, me, you know, being in that dire situation, that was real?”

And of course, a lot of people, (and I’m going to cut this story short), that a lot of people are like, “Oh, yes, sire, you know, that was a dream; this is real; you’re a king; you’re a good king; everything is good.” But somehow he’s not satisfied.

Finally, this kid—his name was Ashtabakr, (which literally means he was all, you know, twisted and everything and his body was all twisted), he, he sets it straight for him. And this is what he says to him.

Because I guess it’s a little bit of a drama. He comes—and when he comes, everybody sees him walking into the court, that he has the answer—and everybody just starts laughing! It’s like, “How could this person who is all, you know, twisted and everything, how is he going to answer the question?”

And all of a sudden he turns to the king and he says, “King, why have you called me in the company of these people who only can tell me, or about me, from looking at leather,” (leather meaning the skin). “That’s all they look at—and they have already made up their mind who I am. They haven’t even talked to me; they haven’t even looked at what is inside of me—and they’re judging me from what they see.”

Anyways, the king realizes that this is somebody not, you know, ordinary—extraordinary—and he gives him the throne and he says, “Please sit here” and welcomes him.

And maybe, maybe during this time, because of the circumstances, this story rings a little bit truer than on a wonderful, normal, “everything going your way” kind of day.

Where everything isn’t so “going your way”—but you just have to say, “Okay! I’m here! The most important thing, this breath is coming and going inside of me. I am. I exist. The miracle of miracles is taking place; I am here. And because I am here—and because I want to know who I am, I will enjoy that process of going inside and feeling who truly I am.”

All this that you see, all this that you perceive, it wasn’t. It is—and it won’t be. That is its reality. And then there is something that was, that is, and that will be.

I mean, after all, the creation of earth and all of this isn’t that old. We haven’t been—relatively speaking, we haven’t been on this earth for that long of a time. Yes, we have made huge advances. But those advances, what do they do for us?

vAnd you realize that, “It’s okay.” It’s okay; you exist. Be thankful! Be positive. Be real! Understand the reality.

Is that simple? My God, that’s simple. You know, of course it is simple; that is incredibly simple. And yet, I know that it is incredibly difficult. It’s profound—but it is difficult, every moment, to be able to be with that reality.

So, not like that king who gets confused—but with that clarity, move forward, every day, and be in that beautiful place.

So, I’ll talk to you soon. Take care; be well; be healthy; be safe—and be.