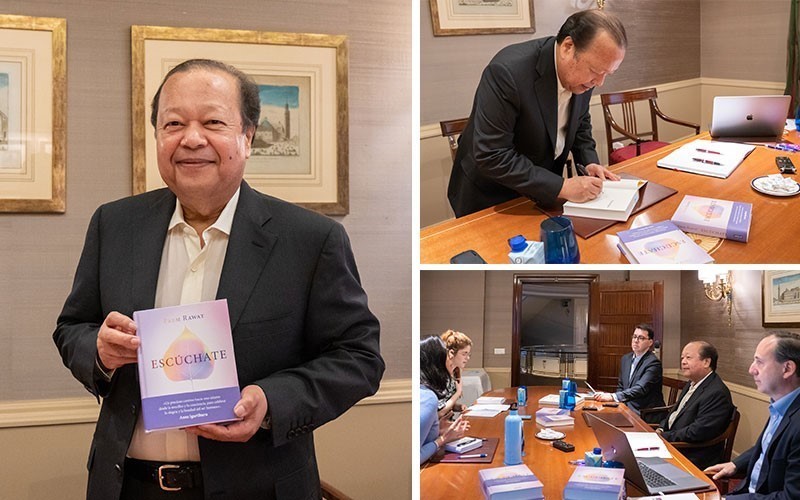 Prem Rawat’s life’s work has been focused on putting people in touch with their inner peace.

In his latest book, “Escúchate” (Learning to Hear Yourself), Prem Rawat tells us, “Peace is in people, not in things. It is in you. And it is there to be sensed, felt, experienced, treasured and celebrated.”

One week after the book launched, Prem’s words were resonating in Spain, where, according to ABC newspaper, “Escúchate” reached the Top 10 Best Seller non-fiction list in Spain.

Media celebrity Anne Igartiburu hosted Prem’s sold-out event at Madrid’s Calderón Theater, sharing the exciting experience with her 132,000 Instagram followers: “There are certain occasions in life when you feel you are very lucky. The launch of the book #Escúchate . . . was one of them.” “Escúchate” was also launched in Argentina on March 1 and in Uruguay on March 16, 2020.

Model and wife of international soccer star Cristiano Ronaldo, Georgina Rodriguez, (16.9 million followers) posted that the book helps its readers find inner peace, supporting the idea that "self-knowledge is what allows you to experience it.”

Of the over 80 reviewers on Amazon Spain, 98% have given “Escúchate” a 5-star Rating (see excerpts below). Visit Amazon.es for full reviews in Spanish.

“In this book I have found an enjoyable, beautiful and direct guide to the heart.” – Gema

“It makes you feel that it is transforming you as you read.” – Marife G.

Order this book in Spanish 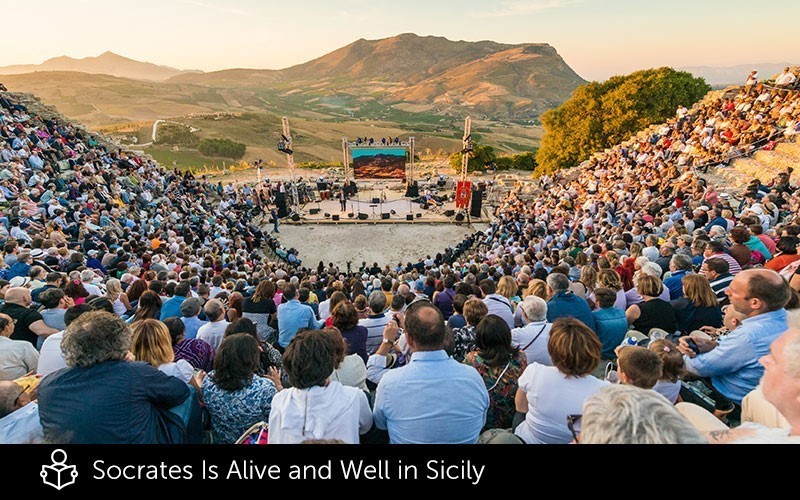 00:00:00 Socrates Is Alive and Well in Sicily Text A Huffington Post article by Chris Corbett

I had the good fortune to be in Sicily, the beautiful island off southern Italy. Whenever I visit Italy I always enjoy La Dolce Vita, and on this visit “the good life” had a special meaning that brought me closer to the land, people and myself. I was attending the “Peace Celebration — Segesta 2015,” the opening event for a local cultural festival. The location was a 2,000-year-old Greek amphitheater, on a remote hillside with an amazing view down to the ocean.

Sicily has a special history, having been occupied by the Greeks, Normans and Arabs, as well as one other group that was like an unfriendly invader — the mafia — who for generations made parts of the island a war zone. This recent history made Segesta’s event all the more heartfelt as they commemorated their signing the European Union supported Bruxelles Declaration, Pledge to Peace initiative, on “an occasion to celebrate the topic of the peace close to the ones who make them a reality every day in their own life, with concrete actions.” Piero Scutari, president of “Associazione Percorsi,” one of the sponsors, said, “We have to reflect peace every day.”

A local TV personality, Massimo Minutella, was a humorous and energetic host, and he began the evening by introducing a classical harpist performing operatic music that captivated everyone with an authentic taste of Italy. She was followed by a couple of short videos that included excerpts from Inside Peace, an award-winning documentary about a project sponsored by The Prem Rawat Foundation to help prisoners around the world learn about the peaceful side of themselves, which was a recurring theme of the evening.

A local band called the Lab Orchestra livened up the event with a mix of jazz, pop and standards and the first song was James Taylor’s “You’ve Got a Friend.” The gorgeous singer later sang an old song by a famous Sicilian performer who dared to denounce the violence of the mafia, which had a heartfelt resonance in this land where people had dreamed of peace for many years.

Following the music, there was a speech by the keynote speaker, Prem Rawat, who has been speaking at many events worldwide as an Ambassador of Peace, promoting the Brussels initiative as part of a lifelong work he has been engaged in for close to fifty years. One of the event’s sponsors was a charitable foundation he founded to help with water and food sustainability projects in Africa, India and Nepal.

Prem spoke about how peace will be the greatest achievement of mankind. Pointing to the moon that had risen over the back of the amphitheater, he said that long ago man had dreamed about going to the moon. But some said it wasn’t possible while others said it was, and eventually it happened. If people believe it’s possible to have peace in this world, it can be achieved. We are the only people for billions and billions of miles, so it is our duty to make it work here, no one else is going to help.

Using the example of the unique location, including a pillared temple on a neighboring hill, Prem talked about Socrates and other scholars from that time who enquired about important issues in places like these.

Socrates said, “Know thyself,” and in that effort to understand who we are, one can discover a place inside that is common to all people and begin the process to care more about each other.

“We don’t care because someone told us to. We tap into our own nature. And the caring comes from inside.” We were all encouraged to join the Socrates Club, to begin an individual effort.

Following a musical interlude, including a song from the film “Life is Beautiful“ (which Massimo was proud to point out was Italy’s Oscar-winning film), there was a question and answer session. Salvo Ficcara, a famous Italian actor and comedian, was the host for the session that included questions from a Nepalese earthquake survivor, an inmate at a prison, and a gang member.

The prisoner asked: Is it possible to forgive those who have done violence to you? Prem’s answer was, “We have both good and bad, anger and peace inside of us, in a 50-50 ratio but it is our choice which part we embrace. Don’t let anger manage you — you manage it. For example, if someone else takes a parking place you also had your eye on, you can choose to get angry or simply smile and be gracious, saying ‘yours, good luck.’” Another question came from a student in Rome who asked if the expression: “Building peace by preparing for war” was a valid approach. Prem commented: “Did this strategy work until now?”

Salvo shared a very poignant story about a local priest who was seen by the mafia to be critical of their activities, so a contract was put out on him. One night as he was arriving at his home, a killer approached from behind. The priest knew he was a target and turned and gave the man a kind and compassionate smile. He started to enter his house and was shot. The killer, who was also responsible for other murders, surrendered himself to the police soon after. He said he could not live with the guilt of having killed such a peaceful man. The moderator said it was a gift from Sicily to Prem, to use the story in his speeches to show the power of peace.

The last speaker was the mayor of Segesta who gave an impassioned speech about the individual duty of people to look for peace and presented Prem with an honorary citizenship. The tone of the event was so uplifting that when the band came out and played Pharrell Williams “Happy,” the whole theater was on their feet dancing along, waving phones with the screens lit up — the ancient Greeks never had it this good!

As I walked back down the hill through the fragrant countryside, past the Greek temple, I reflected on the generous spirit of the local people in this small town. They had put on such a sweet event to affirm the importance of peace. It was done in their own simple, heartfelt way, with the special Italian style of passion, some typical chaos, a bit of art, and a lot of warmth. The event was very touching, making the invitation to join the Socrates Club to “know myself” an appropriate next step. I don’t expect to find an ultimate answer anytime soon, but the journey is the destination, full of rewards along the way. Being in Sicily was certainly one of those, as I set off to meet some friends to enjoy the fine dining in the harbor below. 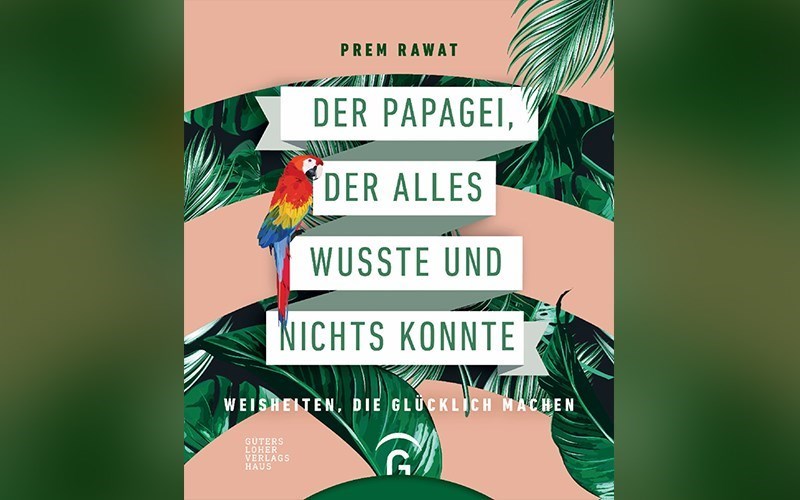 00:00:00 Der Papagei, der alles wusste und nichts konnte Text No one can take your inner freedom. Hurt no one.

The book is available now from leading High Street and online book sellers across Germany. 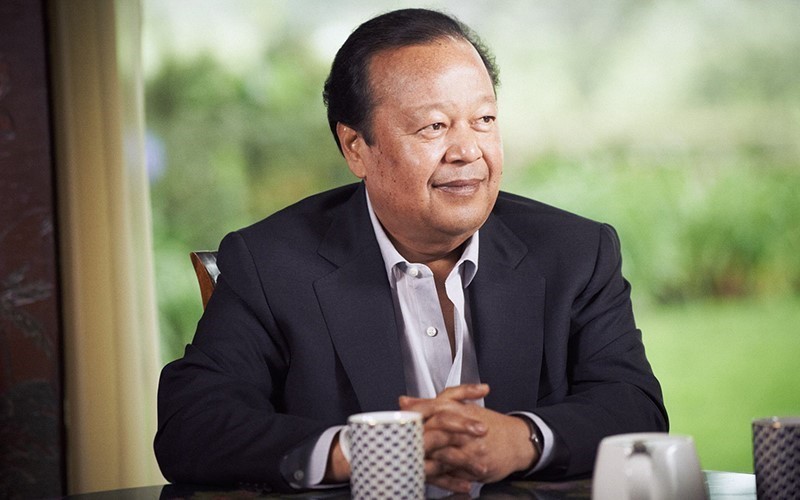 Unlike most instruction manuals, Splitting the Arrow makes no attempt to reduce the profundity of life to arbitrary lists of what to do and what not to do. The book evokes rather than prescribes, fostering the kind of mindset that makes it easy for readers to sense, at a cellular level, whatever they need to understand in order to live their lives to the fullest.

Much of the book’s impact can be attributed to its artful structure — a confluence of Mr. Rawat’s skillful retelling of classic teaching stories, his lucid commentaries about life, and the delightful illustrations of Aya Shiroi. The stories open the door, the commentaries usher us through, and the illustrations further humanize the reading experience.

The choice of a story as the core of Splitting the Arrow is a wise one. Since the beginning of time, storytelling has been the most effective way to deliver a meaningful, memorable message. Deconstruct any book of wisdom, regardless of its originating culture, and you will find the story at its core.

The brilliance of Prem Rawat’s stories? They deliver a timeless message in as few words as possible — a message that inspires readers to pause and reflect on what really matters about their existence: “Do you know who you are?” the author asks. “That may sound like a strange question, but your story truly begins when you can start to feel what’s happening inside you.”

If you are looking for esoteric teachings to make yourself feel better about the advanced state of your spiritual attainment, you have come to the wrong place. Splitting the Arrow is as simple as it gets. Simple like water. Simple like breath. Simple like the counsel of one of the most brilliant minds the world has ever known, Albert Einstein. “Everything should be as simple as possible,” he explained, “but no simpler.”

Splitting the Arrow accomplishes this noble task in spades, distilling down the essence of what’s most important about life in the simplest way possible.

Available for purchase on Amazon. Also, available in Japanese and English from Bunya Publishing. Spanish, Portuguese, and Chinese versions will be released later in 2016.

Mitch Ditkoff is the Co-Founder and President of Idea Champions, an innovation consulting and training company. He is also the author of the recently published STORYTELLING AT WORK: How Moments of Truth on the Job Reveal the Real Business of Life.